Sam and I didn’t have a particularly good first impression of Cambodia. We got off our boat in the heart of Phnom Penh and were greeted by scorching heat and pushy tuk-tuk drivers. We had trouble finding a place to stay and were underwhelmed by the food. But after a few days, things changed. It’s not that we grew to like Phnom Penh. Rather, we realized why the city didn’t match up to others we had visited.

Modern Cambodia is, in a sense, less than 40 years old. Pol Pot and the Khmer Rouge ruled from 1975 to 1979, and in those four years they destroyed the country. One out of every four Cambodians was murdered during the genocide, with special attention paid to city dwellers, the educated, and ethnic minorities. In his quest to create an agrarian utopia, Pol Pot killed 2,000,000 people. 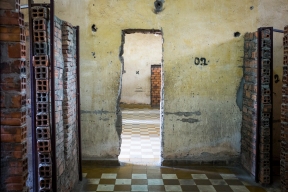 There are two stops tourists in Phnom Penh make to learn about the genocide. The first is S-21 (also known as Tuol Sleng, or “Hill of Poisonous Trees”). Tuol Sleng was a secret prison where 20,000 men, women, and children were held.

The Khmer Rouge were stunningly methodical in their madness. Purported enemies of the state were brought to the prison, photographed, and tortured until they confessed their crimes. Innocent citizens who had no idea who the CIA are were beaten until they admitted to working for the United States intelligence agency. Interrogators were not permitted to kill prisoners; once the victims had produced satisfactory confessions, they were sent to the Killing Fields.

The most famous of Cambodia’s many killing fields is in Choeung Ek, on the outskirts of Phomh Penh. Nearly 9,000 people were brought there in the middle of the night, bludgeoned to death (the Khmer Rouge didn’t want to waste bullets or make too much noise) and thrown into mass graves. To this day, bones can be seen all over the grounds. A memorial stupa in the center displays 5,000 skulls; a brutal testament to the savagery of Pol Pot’s regime.

Visiting S-21 and Cheoung Ek puts the rest of Phnom Penh into perspective. It’s a sobering experience that’s still with me; I can’t help but tear up as I write this. Thanks in part to US bombing campaigns during the Vietnam War, Pol Pot came to power and committed atrocities that defy description. Less than half a century later, Cambodia still has a long way to go to recover. We ended up meeting some wonderful people in Cambodia, and we also looked at bad experiences through a different lens. I wish I had something smart to say to wrap this all up, but I really don’t. I’ll just say this: if you ever visit Cambodia, take the time to educate yourself. It’s too easy for backpackers to treat Southeast Asia like a playground, and nowhere is that more fraught than in Phnom Penh.