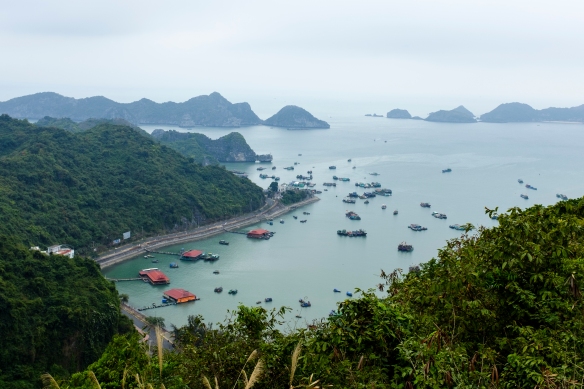 One of the biggest tourist attractions in northern Vietnam is Ha Long Bay, an area off the coast filled with thousands of towering limestone karsts. Tourists flock there in droves to spend a couple of nights on junk boats. While the bay is supposed to be beautiful, the experience of visiting is a mixed bag. It’s extremely crowded, and decent tours get expensive fast. In addition, it’s risky booking a tour in advance because of how unpredictable the weather is (it’s often rainy, or at least too foggy to really appreciate the karsts).

Sam and I knew there had to be a better way to see the area. After a little searching, we figured out that you can travel independently to Cat Ba, an island near the bay. From there it’s easy to book day trips into Lan Ha Bay, the less touristy (but just as majestic) southern portion of the bay.

We’ll get to Lan Ha later, but for now let’s focus on Cat Ba itself. Hotels in the area are concentrated in a very small town on the southern edge of the island. It fills up in the summer, but in March we found a perfectly nice room in a guesthouse for $7 a night. It was a great base to not only travel into the bay, but to explore the island. We ate with fisherman, rode motorbikes, and visited historical sites. While we haven’t tried the junks, I feel confident saying that this is the best way to see the area. 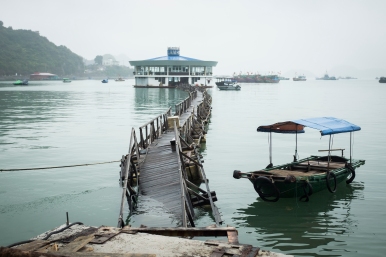 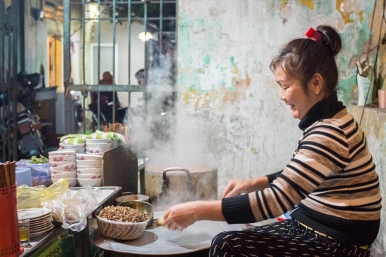 We’re not sure what this soup was, but it was made with wheat noodles, fish balls, beef, and crab paste. Seems to be a variation on bun rieu?

Boats sit in Cat Ba’s harbor, with hotels visible in the background. While Cat Ba is a fairly large island, hotels are largely constrained to one main street along the water and a couple of side streets leading from it.