Sam and I have been in Hanoi five nights. Or has it been a month already? Trouble with time will clearly be a theme of this trip.

It’s Sam’s first trip to Hanoi, but I’ve been once before and thought I had some idea of what to expect. As it turns out, two nights with a school group left me unprepared. This city is so much crazier than I remembered. The streets are packed with motorbikes, of course, but also cars. In the Old Quarter, just walking down the road feels harrowing (sidewalks are dominated by street food vendors and parked motorbikes). High inflation means that the prices I paid just a couple years ago have as much as doubled. And the smog, how could I forget that? On a bad day you can’t see across Hoan Kiem Lake. I’ve read that the air here is as polluted as it is in Beijing.

I don’t mean to sound negative, though; we’re having a great time. We came here to eat, and the food has largely lived up to our hopes: rich phở, smoky bún chả, slippery bánh cuốn, and much more (don’t worry, I’ll talk more about food later). Prices, while higher than I remember, are still low. The two of us can eat a filling meal on the street for less than $5. Bottles of beer cost just under a buck, but you can get a glass of bia hơi for 25 cents. 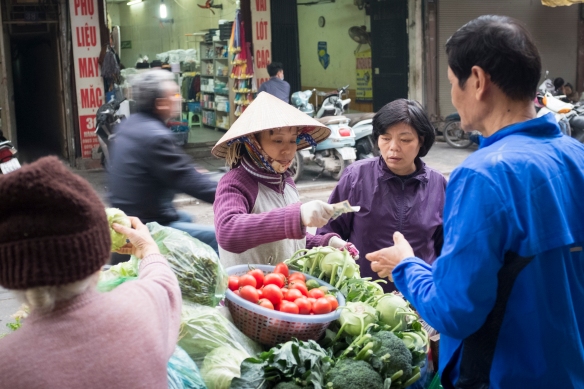 We’re staying in the Old Quarter, the tourist center of Hanoi. The energy is fascinating. Vietnam attracts an eclectic mix of tourists. The bulk seem to be from Europe and Australia, though Asia seems well-represented (we ate phở next to some lovely Singaporeans). We’ve met fewer Americans, but they’re around. It’s quite a mix of ages, too: young backpackers hauling bags nearly as large as they are, middle-aged groups on buses far too large for these narrow streets, and retired couples going it on their own.

Leave the Old Quarter and the tourists start to disappear. You’re left with an array of locals: older women cooking on the street, middle-aged men getting drunk on bia hơi, and people of all ages zipping around on motorbikes. Prices fall slightly, and English becomes less prevalent. Good food is all around. We could spend days just walking and exploring further and further reaches of the city, but the sun and smog have constrained us somewhat.

There’s a lot to like about this city, but we haven’t fallen in love with it like I expected. We’ll be here most of the week and then take a short trip north. After that we’ll come back to here to recompose, but probably get on the road fairly quickly. There’s so much more to see. 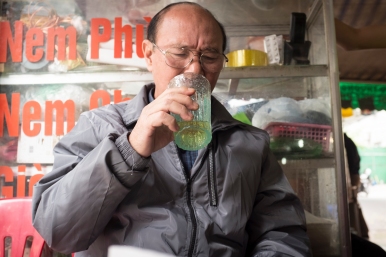 Bia hoi is all over the streets of Hanoi. This low-alcohol beer is brought in fresh each day and sold for rock-bottom prices.

A bridge leads to Ngoc Son Temple in the middle of Hanoi’s Hoan Kiem Lake. 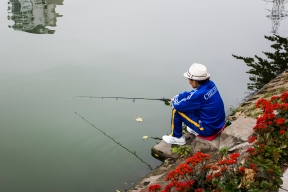