At this point, I don’t have to explain why a crowd of angry protesters amassed at Union Square in New York City on the evening of November 24, 2014. Earlier in the day, we had received word that a grand jury in St. Louis County had reached a decision on whether to indict Ferguson, Missouri police officer Darren Wilson for the killing of 18-year-old Mike Brown.

Expecting a 6:00 p.m. announcement, the protest at Union Square began around 5:00. Members of the crowd spoke, sang, and chanted.

The announcement was pushed back to 9:00 p.m. The crowd stood strong. Finally, word started spreading of the decision, as predictable as it was disheartening.

The immediate response was one of denial. Shouts penetrated the tense air, imploring people to wait for an official announcement. Within a few minutes, however, there was no more denying what had just happened. The crowd started into the four and a half minutes of silence requested by Brown’s mother.

As the crowd stood, fists raised, Bob Marley’s “One Love” started playing. The moment of silence gave way to a sing-along. As the song wound down, the somber, restrained mood changed. It was time to take to the streets. 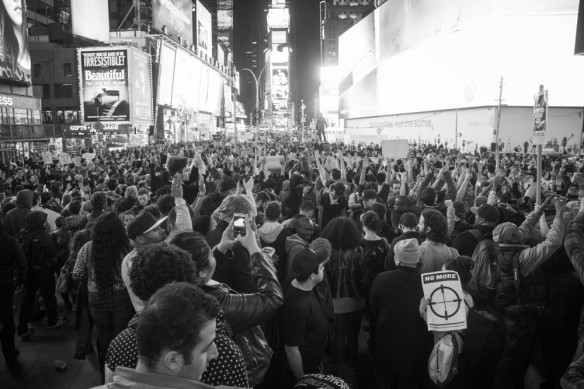 From Union Square, the crowd marched south, eventually hitting 9th Street. For their part, the NYPD did not fight the march, instead following along and trying to block traffic. The protesters headed west to 6th Avenue and made their way up to Times Square. By now, the group had swelled to more than 1,000 people. At Times Square, there was a brief pause. People were clearly unsure of what was next.

At this point, much of the crowd dispersed. Several hundred people, however, decided to keep marching up to Harlem. This group made its way all the way to 125th Street. The protesters headed east, eventually coming to the on-ramp of the Triborough Bridge. Initially, it looked as people would simply use the plaza by the ramp as a meeting point. Then, people started running up the on-ramp.

About 100 people made their way onto the bridge, shutting it down in both directions. They reached an impasse when the cops refused to let them continue to the Bronx. As people debated on what to do next, the paddy wagons arrived. Dozens of cops in riot gear followed, and it became clear that the police were just about done letting the protesters do as they please. Most of the group on the bridge decided to walk back to the group that had stayed in Manhattan, but decided to stand firm before getting all the way off of the bridge.

Finally, the NYPD reached its limit. An ultimatum was issued: Get off the bridge in five minutes or be arrested for disorderly conduct. Finally, the bridge group ceded its position. It was just night one, and there were more battles to fight.